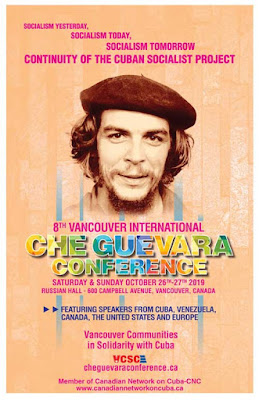 These words, spoken by revolutionary hero and visionary Che Guevara 58 years ago, ring just as true in today’s world. Imperialist forces today have taken a major offensive against progressive and revolutionary governments and movements throughout Latin America. These revolutionary advances are what makes the blood of imperialist countries boil, as Che Guevara said. It also fills them with fear, as oppressed peoples look to the examples of Cuba and Venezuela and threaten the hold of imperialism in Latin America, and around the world.

It is with the revolutionary spirit of Che Guevara’s legacy that the International Che Guevara Conference first started in 2008, organized by Vancouver Communities in Solidarity with Cuba (VCSC). Since the triumph of Cuba’s 1959 revolution to today, the vision and political ideas that shape the Cuban revolution remain a source of inspiration, discussion and debate around the world. This one-of-a-kind conference is an opportunity explore these ideas from a uniquely working-class perspective. The Che Guevara Conference brings together intellectuals, activists, authors, and political leaders from Cuba, Venezuela, North America and Europe, with the goal of not just discussing but learning from these ideas.

The 8th International Che Guevara Conference on October 26-27, 2019 in Vancouver, and October 29 in Kamloops and Calgary, centered on the theme: “Socialism Yesterday, Socialism Today, Socialism Tomorrow: Continuity of the Cuban Socialist Project”.

The first day of the 8th International Che Guevara Conference, held at the Russian Hall in Vancouver, Canada, started off with an Indigenous welcoming led by Kelly White, who is a Coast Salish elder, teacher, broadcaster, and long-time social justice activist. Following Kelly, VCSC coordinator Tamara Hansen gave an opening to the conference, before introducing the first keynote speaker, Giuvel Orozco Ortega, the Deputy Head of Mission and Counsellor at the Cuban Embassy in Ottawa, Canada. His keynote talk addressed the topic, “The Cuban Socialist and Internationalist Revolution. The Challenges of an Unwavering Leadership. How Far Have We Come?” This very comprehensive talk is printed in this issue of Fire This Time on page 19.

The first workshop of the day was titled “The Dynamism of the Cuban Revolution: 60 Years of Developing the Leadership of Revolutionary Youth”. This workshop was given by David Aldama Pando, the Third Secretary of the Embassy of Cuba in Canada in charge of academic affairs and relations with Cuba solidarity groups in Canada. David Aldama spoke from his experience as a young Cuban revolutionary, as he outlined both the historic and ongoing role of youth in the Cuban revolution.

The workshop “Cuban Sovereignty, Sustainability and Community – Food Security is just the Beginning” was delivered by Wendy Holm, an agrologist, columnist, author and speaker, who organizes the Canada-Cuba Farmer to Farmer project and has written extensively on Cuba’s commitment to sustainable farming practices. The next workshop “Cuba and Venezuela: Independence and Unity in the face of U.S./Canada Aggressions” was delivered by Arnold August from Montreal, Canada. He is an accomplished author and journalist, whose latest book "Cuba-U.S. Relations: Obama and Beyond" (Fernwood, 2017) was bought by many participants. This workshop opened a critical subject, in light of the escalating imperialist aggression against Cuba and Venezuela.

Before continuing to the evening portion of the program, a special announcement was made by Janine Solanki, national coordinator of the Che Guevara Volunteer Work Brigade. Janine encouraged participants to travel to Cuba and experience this revolutionary island for themselves through the Calixto Garcia Brigade (December 2019) or the Che Guevara Volunteer Work Brigade (Spring 2020). 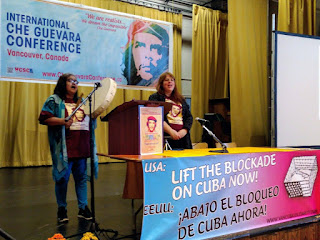 The highlight of Saturday evening was the Vancouver premier of the documentary “Cubanas, Mujeres en Revolución”, which captivated the audience by weaving together the historical and current role of women in the Cuban revolution. The screening was preceded by a special video introduction from Maria Torrellas, the director of the film, who sent heartfelt messages of solidarity from Argentina. Following the film, a commentary and discussion was led by Stephany Mazuera and Azza Rojbi. Stephany Mazuera, who is from Colombia, spoke from her experiences studying medicine in Cuba at the Latin American School of Medicine (ELAM) in Havana and the Ernesto Che Guevara faculty in Pinar del Rio, Cuba. (Her speech is printed in this issue of Fire This Time on page 22) Azza Rojbi then spoke to reflect further on the film and the advancements of women in Cuba’s “revolution within a revolution”. Azza Rojbi is a Tunisian social justice, LGBTQ+ activist and coordinator of Friends of Cuba Against the U.S. blockade – Vancouver, as well as author of "U.S. & Saudi War on the People of Yemen" (Battle of Ideas Press, 2019). 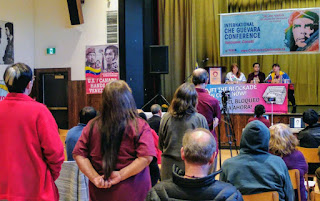 After Tamara Hansen opened the second day of the conference, participants delved into the theme “Venezuela’s Bolivarian Revolution Today: How Far We Have Come”. This keynote address was presented by Dr. Luis Acu?a Cede?o from Sucre, Venezuela, currently living in Ottawa, Canada. Luis Acu?a who is the Chargé d'Affaires at the Venezuelan Embassy in Ottawa, Canada, was former Minister of Higher Education in Venezuela under then-President Comandante Hugo Chavez. His speech on this vital topic set the tone for the following workshop, “#UnblockCuba #UnblockVenezuela - Building the Solidarity Movement: Our Tasks and Perspectives in the Imperialist Epoch” given by Tamara Hansen and Alison Bodine. Tamara Hansen, alongside being the coordinator of VCSC, is also a member of the executive of the Canadian Network on Cuba (CNC) and is author of the book "5 Decades of the Cuban Revolution: The Challenges of an Unwavering Leadership" (Battle of Ideas Press, 2010). While Tamara’s talk focused on building solidarity with Cuba (see her talk printed on page 8 of this issue of Fire This Time), Alison focused on the Venezuela solidarity movement and the importance of defending Venezuela against U.S. aggression. Alison Bodine is the coordinator of the Fire This Time Movement for Social Justice Venezuela Solidarity Campaign and is the author of "Revolution & Counter-Revolution in Venezuela" (Battle of Ideas Press, 2018).

Following a lunch break, the afternoon explored the theme “The Cuban Tightrope: Between the Plan and the Market” presented by Helen Yaffe. Speaking via video conference from Glasgow, Scotland, Helen Yaffe is a Visiting Fellow at the Latin America and Caribbean Centre and a Lecturer in Economic and Social History at the University of Glasgow. She is also the author of "Che Guevara: The Economics of Revolution" (Palgrave Macmillan, 2009).

The next workshop was presented by Keith Bolender, and also served as the first book launch for his newly published book, “Manufacturing the Enemy: The Media War Against Cuba” (Pluto, 2019). Keith is a freelance journalist who worked for more than 10 years with the Toronto Star, is a member of the Institute for Public Accuracy on their Roster of Experts for Cuban Affairs, and lectures at the University of Toronto School of Continuing Studies.

Next, Macarena Cataldo, a Chilean activist and host of “El Bus de las 7” on Coop Radio 100.5 FM, spoke passionately for 15 minutes about what is currently happening in Chile and the years of oppression that have brought Chileans out to the streets now.

Nearing the end of the conference, Kelly White and MaryAnn led a beautiful Indigenous blanketing ceremony to honour the Cuban and Venezuelan guest speakers. 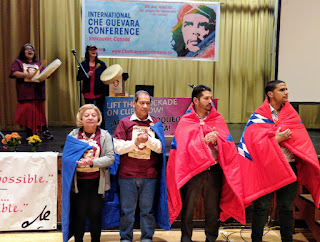 The final workshop was titled “Cuba’s New Constitution & the Continuity of the Cuban Socialist Project” delivered by Giuvel Orozco. This workshop examined the process and outcome of Cuba’s new constitution, and its significance as Cuba charts its future.

As the conference drew to a close, the closing keynote address was given by Ali Yerevani, who is the Political Editor of the Fire This Time Newspaper. His address, “Socialism Yesterday, Today, Tomorrow: Continuity of The Cuban Socialist Project” encompassed the theme of the conference and reviewed the reasons why Cuba is an example for those looking to socialism as a way forward towards a better world.

Tamara Hansen closed the conference by reflecting on the inspiration for holding this conference. In a world that is plagued by capitalist crisis and injustice, Cuba stands as a beacon of hope and struggle. Tamara reviewed the two days of the conference and all the very relevant and important topics discussed by more than 200 people who came to the conference.

Che Guevara Conference on the Road! 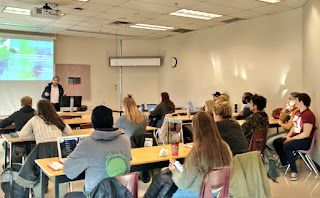 On Tuesday October 29, Dr. Luis Acu?a Cede?o and David Aldama Pando spoke to students and professors at Thompson Rivers University in Kamloops, BC, where they were hosted by the TRU School of Social Work & Human Service. The Venezuelan and Cuban diplomats had a fruitful exchange with students who were eager to ask questions and learn more about what is happening in Cuba and Venezuela today.

A short flight later, and the Che Guevara Conference touched down in Calgary, Alberta. This event was co-organized by Colectivo por la Memoria Salvador Allende, Canadian-Cuban Friendship Association-Calgary-CCFA, and Vancouver Communities in Solidarity with Cuba. After Luis Acu?a and David Aldama delivered their talks many engaged in a dynamic discussion with the speakers. 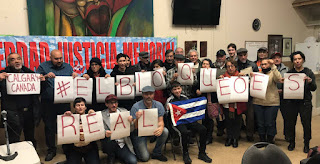 Over three days and across three cities, the 8th International Che Guevara Conference covered a wide breadth of important topics presented by amazing speakers. This conference was truly a success as it gave people an opportunity to discuss and debate topics aimed at the struggle for a better world, with Cuba as an example. As well during the conference more than 100 books were sold. With participation from activists and organizers to those simply interested and wanting to learn more, this is not just a conference to attend, but a springboard for further developing ideas with Cuba as an inspiration and an example.

● Che Guevara talking
about the Bay of Pigs

● PROGRAM
● REPORT BACK
● STATEMENT AGAINST COUP IN HONDURAS

● Directions from Hotel
to Russian Hall